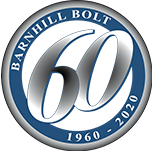 In 1960, J. C. (Jack) Barnhill, began Barnhill Bolt Company in Albuquerque in a small, block warehouse on the property of a large steel manufacturer.  He quickly started selling steel, brass, silicon bronze, stainless steel, nylon and plastic fasteners in sizes small enough to require tweezers to manage and fasteners in sizes large enough to hold together mine shafts and bridges.  Jack took great delight in knowing that fasteners he sold ended up in space, and even on the moon.

Within four years the company had grown from one employee to six, and had moved to its current, much larger location . Both of Jack’s children and their spouses joined the company during those first four years and in 2010 Jack's daughter Mary became the sole owner and currently serves as CEO/ President of the Company.

All of  Mary's children worked in the business during their college years.  Now, two of those children and one spouse are the successful leaders of Barnhill Bolt.

Barnhill Bolt has continued to grow and add employees and many have been with the company for 10, 20, 30 and some even 40+ years. Our long-term employees have become loyal friends.

Though he died in 1978, Jack left Mary and his grandchildren standards for excelling in business:

Jack would take great delight in knowing that his grandchildren strive to preserve those standards.